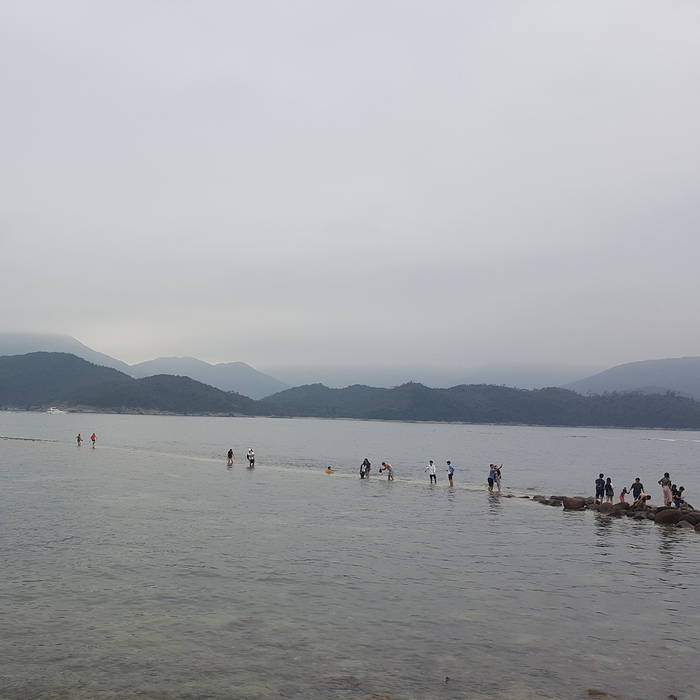 Submerged tape loops, to me, is more art project than album, it consists of a cassette and accompanying book of prose and photos - including a foreword by Yang Yeung. It’s part of an ongoing project in which I create 7-second tape-loop recordings and bury them in the earth, in the location at which they were recorded. The tapes are later dug up and placed back in their cassette casing for listening. The result of the time the loops spend embedded in the earth is the physical deterioration of the magnetic tape, and a degradation of the audio recording.
This iteration was developed whilst on a residency in Hong Kong in the summer of 2019. Surrounded by water I decided to submerge these tape loops instead. Six locations were chosen according to their proximity to a body of water, be it the Hong Kong harbour, two neighbouring islands, a fountain on newly reclaimed land, a bubbler next to fragments of the old sea wall... and six loops were recorded at each of these locations. The loops consist of two 7-second field recordings, one recorded above the water, and one recorded from within the water. After recording, each loop was removed from its cassette casing and submerged for one month in water collected from the location. Later, the loops were dried, placed back in their cassette casing and digitised. Burying and submerging the tape seems to give the places at which I record a sense of autonomy over their own soundings. I imagine this as a collaboration of sorts — I make a recording and the physical variables of each place and location alter it — asking and prompting a place to affect its own sounding. While the magnetic coating of the tape retains sonic remnants of the recorded sounds of the place, the physicality of the tape ribbon retains material remnants of the place: earth, sand, salt, other, which, in turn, impart audibly on the recording in the form of crackles, scratches, tape-warp, and hiss.

Special thanks to Yang Yeung for contributing such a moving and personal introduction for the booklet. Thank you to Fiona Lee and to soundpocket for sharing thoughts on field recording, and taking me to special locations. It was a very visceral and affecting time and i'm so grateful to all who shared with me during this very difficult period in Hong Kong. Thank you to Asialink Arts & the Hong Kong Arts Centre - this project was developed whilst on an Asialink Arts Creative Exchange with HKAC. Asialink Arts made this happen. Supported by the NSW Government through Create NSW.