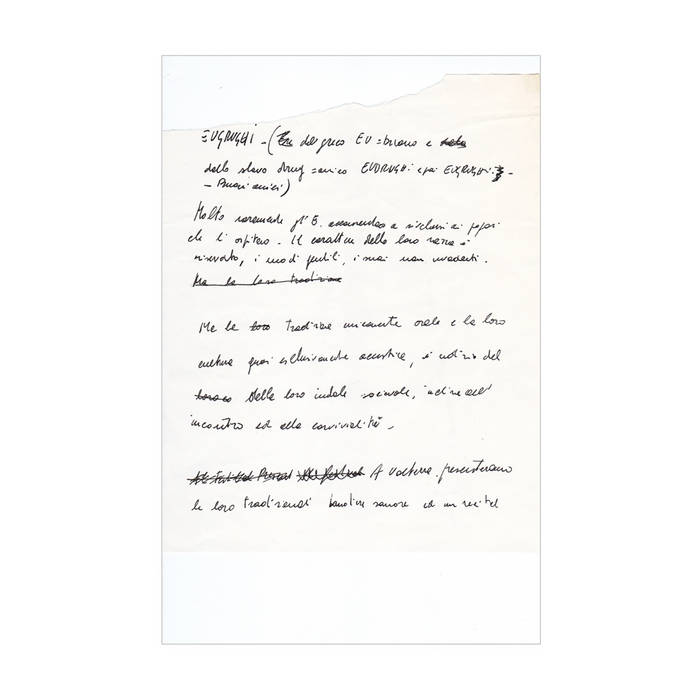 In 1992 the Italian sound artist Francesco Michi curated a project for the Volterra Teatro Festival, called “I Popoli Virtuali” (Virtual Populations). The original idea was to create and show the evidences of the existence of these virtual populations.

The “virtual” adjective here is intended in all its different meanings:
⁃ Virtual Populations are not “ongoing” but they've got the potential to be.
⁃ They are unreal, at the border between desire of reality and imagination.
⁃ Their existence is supposed for convenience, dealing with a certain group of stray peoples as “part of a population”, where individuals appear in different time and places.

Michi arranged a series of installations, performances and an exhibition. He himself created the Eugrughi Population, with their own poetics and rituals.

“Poesie Eugrughe” is the representation of a supposed Eugrughian poets recital: Il Bosco che Sussurra (The Wood that Whispers) . Original audio documentations of Michi's work, conceived as a 50 minutes endless loop for a live installation, has been edited and remixed by Francesco’s son, Pietro Michi.

Eugrughi are a virtual population, who live in small groups all over the Europe, particularly in Tuscany

Eugrughi speak a very complicated language, their culture refers to a basically oral tradition and to an almost entirely acoustic culture.

For example, the Eugrugian flag, is a flag which the wind does not shake, but makes sound: every flag pattern is slightly different, and we can imagine that this has a meaning, or simply that there are several versions of a basic pattern which represent them.

But very particular are the Eugrughian Poets recitals:
Eugrugian poets perform in small woods, at night: they hide from sight and at a very low volume they recite, all together, each one in a different point of the space, their poems.
Sophisticated techniques help Eugrugian poets to obtain complex and dense sounds from their language.
In the morning, the sounds of the day prevail on their songs and so the recitals end in a natural way.

A world, Eugrughi’s world, in which the sound is the paradigm: through it they express and narrate, through it they are recognizable showing their acoustic emblem.
Their “legend” is about a hypothetic world where the acoustic takes the place of the vision, and we think, imagine, that it can be better than that one of the cultures existing in the reality we live: lower, more respectful, more whispered, whose limits are not traced from: “how far my eyes arrive to see” but: “how far I can hear”.

Francesco Michi lives and works in Firenze, Italy, where he also took a degree in Philosophy and then in Electronic Music.
Since 1982 he published theoretical essays, books, CDs, realized sound installations, performances, sound sculptures, sound and musical machines, radio programmes, etc., in Italy and abroad. All these works are based on the concepts of acoustic ecology and acoustic design.
He is also involved in music and on the Web, both as a theorist and in designing and realizing web-based works.
In 2007, 2008 and 2012 he realized with Mechi Cena two series of "L'Essere Rumoroso" and ìSuonettiî, radio programs on the sound produced by the Swiss National Radio (RSI2).
Since March 2009, he is the Italian coordinator of FORUM KLANGLANDSCHAFT (FKL), an international association for the soundscape.

Pietro Michi lives and work in Firenze, Italy, and study agronomy, but also natural science, biology and ecology.
He starts to work into the sound field since 2012 but began to produce and publish after 2016 with many aliases, especially in the drone, noise and ambient field with his main project FossaDelRumore. But also into techno and bass genres.
Into 2017 he starts to work on the link between biology/ecology and sound/music. In late 2017 he founded a music label called "Biodiversit‡ Records".
Since 2012 he also worked in many radio station and at some soundtracks for short movie and live installation.